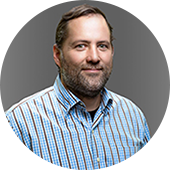 Kevin Ryan personifies the entrepreneurial spirit and is an example for fellow innovators at the Don Ryan Center. Ryan is currently the chief executive officer at Service Brewing Company, a micro-brewery in Savannah. He followed his passion and began making beer after an accomplished and prestigious military and corporate career.

His road to his new venture was paved with his experience with the United States Army and several executive positions at CareCore, the nation’s largest specialty benefits management company. CareCore is the first national company to base its headquarters in Bluffton.

Before his corporate career, Ryan served as an infantry officer in Alaska and Colorado and commanded two infantry companies in Iraq. He earned an engineering management degree from the United States Military Academy at West Point.

Ryan’s new business, Service Brewing Company, is a veteran-owned and operated brewery. His company’s mission is to donate a portion of its proceeds to charities that support military service members. Ryan also strives to experiment with innovative craft beers as he uses locally-grown ingredients to connect the region’s farmers with its consumers.